Root canal pain or toothache pain after root canal is of the most dreadful pain considered by people, which is happened due to some crack or wears-tear or due to bacteria in the pulp tissue of the tooth. bacteria infects the pulp which will results severe throbbing toothache. all the blood vessel which nourish the tooth also connect with the trigeminal nerve of mouth contained in the pulp. Here we will help you for root canal pain relief.

Why I’m having pain after root canal ?

Due to infection, the quantity of blood flow is increased or inflammation of the pulp tissue which puts pressure on nervous system. Nervous system sends signals to the brain which is a major cause of a toothache. An abscess which is formed via dying of the soft tissue which is placed inside the tooth if they are not removed infection can spread outside the tooth. One of the best option to remove the dead tissue, stop the infection and root canal pain is endodontic therapy. When endodontic therapy failed, tooth extraction only option to eliminate infection & you can solve the problem of toothache in root with root canal.

You will feel some pain during root canal therapy because it is a procedure of removal of tooth structure and to enter pulp chamber, then removal of the infected pulp tissue, tooth nerves and the dead cell of the tooth and then finally the restoration of the tooth with a dental filling or crown. You will have to visit CLINIC several times during the process of completion of a root canal therapy. 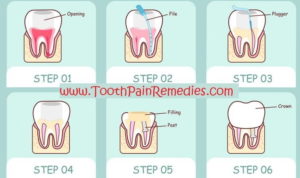 Root canal process, not a painful process but you might feel some pain after root canal. Anaesthesia is used for toothache root canal pain relief before procedure. Generally, dentist gives anaesthesia to numb the part to be treated so that, you don’t feel any discomfort at all. And as tooth nerves are already dead due to the infection so you won’t feel anything in there.

Badly inflamed tooth:- If the pulp inflamed it creates an acidic environment that mitigates the effect of anaesthesia if any tooth nerves alive than it may increase the pain during canal.

Root canal process:- Until the infection is not fully ended tooth cannot be filled and during this procedure, there will be several appointments.

Gas build-up:- If the intensity of pain is too high then dentist 1st open the tooth and allow the abscess to drain which reduce the pressure of pain and relieve the tooth pain. The dentist also places a medication inside the tooth to kill bacteria and fight the infection then dentist sealed that tooth to the next appointment, In that meantime bacteria will decompose and release gas which might increase the pain after root canal. This type of pain stops when all the bacteria are eliminated and the root canal is cleaned.

Air issue:- dentist recommend to prevent air travel during the procedure because the low pressure inside the cabin causes the expansion of gas which is trapped inside the tooth & might cause severe toothache after root canal.

Check out Which is the best medicine for toothache

Root canal procedure is done due to removing bacteria and inflammation in the pulp. Some individual may feel pain due to failure in the treatment and you can also feel toothache at night only. New infection emerges even after the root canal procedure.

Reason for new tooth infection include

How long does it take to go away the pain after root canal and get complete relief?